​The History of St. Michael and All Angels Episcopal Church

On August 18, 1954, twenty-four communicants signed a petition requesting that a Mission be established in South Lake Charles. The 1955 Convention of the Diocese of Louisiana, under the leadership of Bishop Girault Jones, approved the petition for such a mission, St. Michael & All Angels, thus fulfilling the dream of the late Bishop Iverson Noland when he was Rector of Good Shepherd. The women of the Church of the Good Shepherd provided funds to purchase the property for the Mission.

Bishop Jones appointed the Rev. Robert L. Crandall as priest-in-charge of St. Michael's and The Rev. Harold R. Bott, our Vicar. Father Bott assisted Father Crandall at the first Eucharist of the newly forming Mission on St. Michael & All Angels' Day, September 24, 1954, at Fire Station #7, and later services were held in a Quonset hut on the McNeese campus which served as the Student Union. Bishop Jones laid the cornerstone for the church on August 21, 1955, and the first service in the new building was held on St. Michael's Day, 1955. Projected cost for the new building was $36,000 and the budget for the year was $3,242.25. The church was dedicated by Bishop Noland on November 2, 1955.
St. Michael & All Angels grew rapidly under the leadership of Father Bott, becoming a fully self-supporting Parish in 1956.

The Rev. Ralph Masters accepted the call to be the second rector of St. Michael's in 1966. Rev. Masters, former pastor of St. Philip Episcopal in Houston TX, became chaplain to Episcopal students on the McNeese campus as director of the Canterbury group. He was also headmaster of the St. Michael Day School.
​
The Rev. Charles S. Womelsdorf came next on August 7, 1988. The Rev. Womelsdorf came to Lake Charles after an 11 year ministry at St. John's in Thibodaux. Bishop Henton, presided at Rev. Womelsdorf's installation on Sept. 11.

In July 1991, The Rev. Dr. Peter Cook became the fourth rector to serve the St. Michael's congregation. In 2002, St. Michael's unveiled a new look. Gone was the signature A-frame design and a beautiful gothic structure emerged, complete with a new parish hall, renovated sanctuary, new offices, and a bell tower.  Father Cook retired in May 2014.
​ 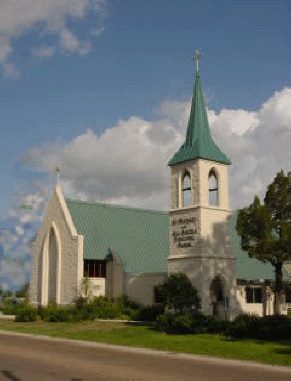 The Rev. D. Seth Donald was installed as the fifth rector in June 2016.  In 2017 our playground was relocated, leaving room for a new fountain and paved All Angel’s Courtyard. Due to the COVID-19 pandemic, much of 2020 prohibited in-person indoor worship. Hurricane Laura, July 2020, caused major damage to the roof and exterior of our church and rectory. Water also damaged the interior of our facilities.  The church was restored and enhanced over the next two years through the generosity of its parishioners.  A livestream system was installed in February 2022 and a new organ in May 2022. Across the street from the church, framing began on the new Recovery House in April 2022. The first phase of a Prayer Garden should be complete in the Summer of 2022. July 15, 2022 was Fr. Seth's last day at St. Michaels. He accepted a new call as the Rector of Christ Church in Covington, La.

In October 2022, the Vestry announced the call of The Reverend Andrew Christiansen as its sixth rector. Fr. Drew's first service at St. Michael's was January 1, 2023. Prior to that, he served as Upper School Chaplain at Ascension Episcopal School in Lafayette, LA from 2021-2022 and youth minister and school chaplain at St. Mark’s Cathedral in Shreveport, LA from 2017-2021. Fr. Drew holds a Master of Divinity from Bexley-Seabury Seminary.

​The people of St. Michael's have grown in the Spirit and in their stewardship over the years. In addition to the many ministries of service within the life of our Parish, our people have become noted for their involvement on the life of the larger community of Lake Charles, and in the Church beyond the Parish level. The clergy and lay leaders of the Parish have a history of making our facilities available to many civic groups and healing organizations, and our parishioners have become personally involved in community service and the wider mission of the church throughout the world.

The History of ​CHRISTUS REX

​SALLYPORT NEWSLETER, Rice University, Houston TX  April 1981
…. Another recognizable though faceless piece (of Parson’s work) is a soaring eight-foot sculpture of Christ in front of a cross. The piece was commissioned by an Episcopal church in (Lake Charles) Louisiana, but the members gave Parsons few directions. “They called to say they had seen my work and could I do a Christus Rex on a cross.” This incongruous combination of Christ in robed glory nailed to the cross puzzled Parsons. “The only other suggestion came from a woman in the congregation. She called me at my studio in Houston to say, ‘David, make it joyful.’ So those were the requirements.”
Parsons wanted the glow of Rembrandt’s Christ and the luminous white-hot heat of Grunewald’s Messiah. Instead of depicting a suffering savior, Parsons erected the cross behind the floating, eight-foot Christ figure which reached out in a gesture of blessing. He left the hooded face in shadow so each observer could project his imagined visage onto the soaring figure, and he covered the piece with bronze, porcelain, and gold to express the radiance he felt was essential.

DAVID G. PARSONS
A memorial service was held in Houston on Saturday October 14, 2006 for DAVID G. PARSONS, a long-time professor at Rice University, a gifted artist, sculptor and thinker.
Copyright © 2023